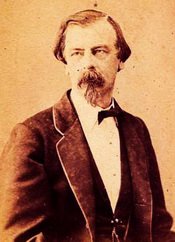 (1823-1883)
Alfred von Wolzogen was a German theatre director and writer. He started studying law in 1841, first in Berlin, and later in Heidelberg, before starting his apprenticeship in 1844 and then going on to work in Potsdam. During the revolutions of 1848, he was called to military service several times. His first wife, Elisabeth Schinckel, was the daughter of the architect Friedrich Schinckel. After her premature death (in 1851), Wolzogen travelled a great deal, visiting Italy, Switzerland, France, Spain, England, the Netherlands and Belgium. Together with his second wife, Harriet Anne Houssemayne du Boulay, he later settled in Berlin, where he worked for the Interior Ministry, which later reassigned him to work in Breslau (now the Polish city of Wrocław). There he started writing theatre reviews for the Breslauer Zeitung in 1959.
In 1867, his old university friend Gustav zu Putlitz resigned from his post as intendant of the Schwerin court theatre and suggested that Wolzongen serve as his replacement. Grand Duke Friedrich Franz II duly appointed Wolzogen to head the theatre, which he led until it burned down in 1882. Wolzogen lived for less than a year afterwards. He regularly wrote reviews and polemical essays (Über Theater und Musik, 1860) and biographies (Wilhelmine Schröder-Devrient, 1862; Rafael Santi, sein Leben und seine Werke, 1865, etc.) and published a volume of Schiller's correspondence (Schillers Beziehungen zu Eltern und Geschwistern und zu der Familie v. Wolzogen, 1858), a history of his family (such as the comedies Geschichte des Reichsfreiherrlich von Wolzogenschen Geschlechts, 1859), political texts, travel literature and minor stage plays (Nur kein Ridicül and Die glückliche Braut, the historical dramas in verse Blanche, Sophia Dorothea and Fürstin Orsini, and the humoresques Die Unke and Lor). He devoted much time and effort to Shakespeare, the great tragedies of Grabbe, and to Bjørnson and Ibsen. With painstaking care, he also staged the music dramas of Richard Wagner.