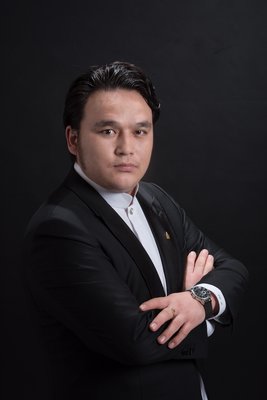 Badral Chuluunbaatar was Born in Mongolia in 1989, he studied singing with Professor Tserenpil Eruu and graduated in opera singing from the Dance College of Mongolia in 2012; he subsequently graduated from the Gnessin Russian Academy of Music in 2016. In the same academy he also obtained his Masters in 2018. In Italy he studied with Maestro Anatoly Gussev, teacher at the "International School of Music" in Milan, and with Maestro Sergio La Stella, of the "Teatro dell'Opera di Roma".
He is the winner of numerous international singing competitions, including:
First prize and prize for the best male voice at the Rimsky Korsakov International Opera Singing Competition in Sankt-Peterburg, Russia, 2016; First prize at the "Sobinov" International Singing Competition, in Russia, 2018; First prize (Golden Star) at the prestigious Chigiana Prize, July 2018; First prize at the "Eva Marton" International Singing Competition in Budapest, 2018.
In 2019 he made his debut at the Verona Arena, in the roles of Amonasro in Aida and Germont in La Traviata. Later he interpreted Germont again in La Traviata at the Teatro Massimo di Palermo and debuted the role of Alfio in Cavalleria Rusticana (2020). In 2021, he sings Aida (Amonasro) at Astana Opera and La Traviata (Germont) at the Teatro Verdi in Pisa.