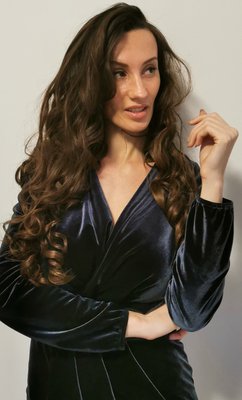 After completing her studies, she won an audition to obtain a two-year scholarship in the opera studio of Deutsche Oper am Rhein in Düsseldorf. She made her debut in the role of Priestess in Verdi's Aida (directed by Philipp Himmelmann, musical direction by Axel Kober and Aziz Shokhakimov) alongside world-famous soloists Boris Staatsenko and Morenike Fadayomi. After success on the boards of Deutsche Oper am Rhein in both Düsseldorf and Duisburg, she also appeared as a Barbarina at Mozart's Figaro Wedding. In the 2015/2016 season she sang the role of The First Nun in Sergei Prokofiev's drama The Fire Angel. She subsequently performed as Echo in the opera Ariadne auf Naxos, conducted by the internationally renowned conductor Wen-Pin Chien. Furthermore, the artist portrayed the role of the Shakhakh princess in the opera Golden Cocker, which was staged by the prominent Russian director Dmitry Bertman. Another role in which the singer successfully presented was Count Ceprano from the opera Rigoletto (G. Verdi). During her two years in the opera studio Deutsche Oper am Rhein, the artist took several singing courses. She soon introduced herself as Queen of the Night at Mozart's The Magic Flute.

After completing her studies, the soprano took partin several concert tours in Austria, Switzerland, Poland, Hungary and the Czech Republic. In Pardubice she presented in Mozart's Requiem conductedby Peter Feranec. In 2017 she performed concerts in Pesaro, Bergamo, Bologna, Venice and G. Verdi's hometown - Le Roncole. In the season 2017/2018 she made her debut on the stage of the SND Opera with Konstanze in the opera Abduction from the Seraglio (W. A. ​​Mozart) directedby Ján Ďurovčík and under the musical direction of the conductor Peter Valentovič. In 2018 she got to the finals of the Antonín Dvořák International Competition in Karlovy Vary.

She also performed with great success in the role of Olympia in J. Offenbach's opera Les Contes d’Hoffmann at the Slovak National Theater / directed by Pavol Smolík, conductor Tomáš Brauner. Most recently, the soprano has received an exclusive offer to portray the main role in the world premiere of the Slovak opera by Ľubica Čekovska Impresario as part of the Bregenzer Festspiele.

She became the Absolute winner of the Franz Lehár Competition in Komárno in 2019 associated with participation in a gala concert in the operetta theater in Budapest and also the Absolute Winner, 1st place in the Erzsébet Házy International Singing Competition in Nové Zámky for 2019. She is the Fresh Absolute Winner of the prestigious SHARON RESCH AWARD competition in Green Bay, Wisconsin, USA, where she competed brilliantly in the competition of 150 singers. In 2021, she will appear in opera houses in California and the Chicago Lyric Opera.

After the big success of the artist in Bregenz Festival, she recieved also the possibility to sing role of Olympia in Aalto Theater Essen under the baton of maestro Tomáš Netopil in March 2021. The huge carreer step in Season 2020/2021 will be the alternation with the well known Diva Mrs. Edita Gruberova. The soprano will have her debut in role of Queen Elisabeth in opera Roberto Devereux ( Gaetano Donizetti) in State theatre Košice. In 2022 she will perform role of  Donna Anna from the Opera Don Giovanni ( W.A. Mozart) in Rudolphinum with Prague Chamber orchestra under the baton of maestro Walter Attanasi.