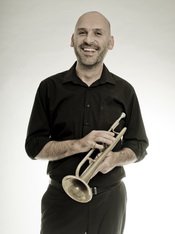 As a highly sought-after musician and arranger, Kornél Fekete-Kovács is constantly involved in Hungarian music life, whether in jazz or contemporary or popular music. Of his many previous bands, the ones that stand out are Brass Age, the Kálmán Oláh Sextet and Blacksmith Workshop. Founder of the Budapest Jazz Orchestra, he served as its music director and soloist between 1998 and 2005. Since 2005 he has led the Modern Art Orchestra, and in 2006 he founded the Fekete-Kovács Quintet. In the course of his career, he has worked with such renowned international ensembles as IASJ Big Band (Copenhagen), EBU Big Band (Amsterdam-Budapest), a Brande International Music Workshop Orchestra (Denmark), the UMO Jazz Orchestra (Finland), the Central European Jazz Connection, the East European Artsamble and the Finn-Hungarian Jazz Workshop. As a composer, in addition to numerous small-scale compositions, his full-length works for jazz orchestra are of key importance. His most recent ambition is to merge the sound of a symphony orchestra with jazz music, which resulted in the release of his 2010 work GRANDEUR as a joint album between the Pannon Philharmonic and his own quintet. From 1995 to 2010, he taught in the jazz department of the Ferenc Liszt Academy of Music, and since 1998 has taught at the Kőbánya Music Studio. From 2003 to 2005 he was a board member of the Hungarian Jazz Federation, and since 2009 he has been president of the Society of Hungarian Jazz Artists. Awards and distinctions: Artisjus Music Foundation Award (2000, 2004), Golden Giraffe Award (2000), eMeRTon Prize – Composer of the Year (2002), Ferenc Liszt Prize (2009), Miklós Orszáczky Award (2010), FONOGRAM Award (2011)