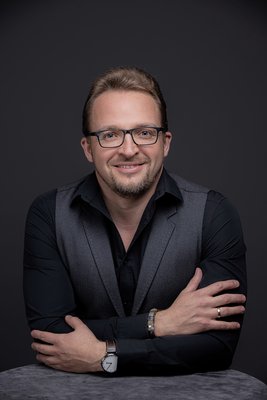 Born in Miskolc, Máté Fülep graduated from the University of Debrecen’s Faculty of Music in 2008 with degrees in voice and voice pedagogy. Although he had already joined the company of the Csokonai Theatre of Debrecen during his student years, sometimes appearing as a soloist there, it was at the National Theatre of Szeged where he made his debut in a principal role, as Figaro in Le nozze di Figaro.
After completing his studies in Hungary, he went on tohone them further at the Royal Conservatory of The Hague. In 2013, he sang thetitle role in Don Giovanni at the Dutch city’s Royal Theatre, In 2013,he was invited to sing the role of Frank/Fritz in Eric Kongold’s Die tote Stadt at the Bartók Plus OperaFestival in Miskolc. Later on, he earned the Annie Fischer Scholarship, which gave him the opportunity to perform Schubert’s Winterreise, as well as recitals of other song cycles.
He made his Hungarian State Opera in September 2015 as Eustachio in Donizetti’s I pazzi per progetto and has appeared there in numerous roles since then,including Dancaïre (Carmen), Jake (Porgy and Bess), Papageno (DieZauberflöte), Chichibio (in the Opera’s composite Mozartian piece L'ocadel Cairo, ossia Lo sposo deluso), Schaunard (La bohème) andChristiano (Un ballo in maschera). He also received tremendous acclaimfor his work singing the baritone roles in Péter Eötvös’s opera Lady Sarashina performed as part of the Armel Opera Competition at Vienna’s MuTh Theater. He took the stage at Müpa Budapest as a concert singer in spring 2020 in the Hungarian premiere of Daniel Schnyder’s The Revelation of Saint John,under the baton of Sebastian Weigle.