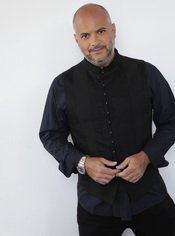 Gaston Rivero was born in the Uruguayan capital of Montevideo and studied at the music conservatory in Buenos Aires. Later on, in New York, the conductor Eugene Kohn recognised his talent and mentored him as he launched his career. He has since become an internationally recognised spinto tenor who has worked with such conductors as Daniel Barenboim, Zubin Mehta, Ulf Schirmer, Daniel Oren and Anthony Bramall.
During the 2002/03 season, he took part in Baz Luhrmann's New York production La Bohème on Broadway. Over the course of his career, he has also worked with other film directors, including Philipp Stölzl, Johannes Schaaf and Kirsten Harms. He has appeared at Berlin's Staatsoper Unter den Linden several times, singing there Manrico in Il trovatore, the title role of Don Carlo, Gabriele Adorno in Simon Boccanegra and Macduff in Macbeth. His other roles include Radamès, Kalaf, Don José, Mario Cavaradossi, Turiddu, des Grieux, Rodolfo and the title roles of Gounod's operas Faust and Roméo et Juliette. He has taken the stages of many prestigious opera houses around the world, such as the Opéra National de Paris, the Arena di Verona, Turin's Teatro Regio, the Opéra de Monte Carlo, Oper Leipzig, Deutsche Oper Berlin, Tokyo's New National Theatre, the Teatro Massimo in Palermo, the Aalto-Musiktheater Essen, the Israeli Opera, Oman's Royal Opera House Muscat and the Grand Théâtre de Genève.
He will be making his debut on the stage of the Hungarian State Opera in December 2018, in the role of Dick Johnson in Puccini's La fanciulla del West.