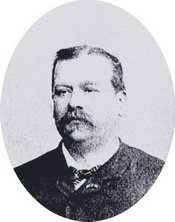 (1843-1900)
Georges Hartmann was born in Paris. He started his business in 1866 and that year began his 25-year partnership with Massenet, publishing his song Poème d’avril. Hartmann co-wrote the librettos for Massenet’s operas Hérodiade (1881, under the pseudonym of Henri Grémont) and Werther (1892), and provided friendship and support to the composer for the rest of his life. He was involved in the founding of the Concert National in 1893. Hartmann went bankrupt in 1891. He continued to work for other publishers, including Fromont, through whom he supported Debussy and his work on Pelléas et Mélisande. Hartmann’s other librettos include Messager’s Madame Chrysanthème (1893) and Hahn’s L’Ile du rêve (1898), both with André Alexandre and Pierre Loti.