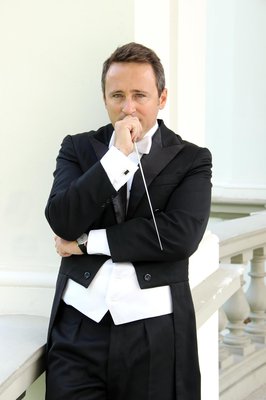 Zsolt Jankó studied violin at the music conservatory in Koloszvár (Cluj-Napoca) and then went on to earn degrees in conducting at the Gheorghe Dima Music Academy in the same city in 2002 and at Vienna’s Universität für Musik und darstellende Kunst in 2004. He received additional training at the Conservatorio di Musica Benedetto Marcello in Venice in 2005.
He has also honed his skills in numerous master classes and teaching programmes under the direction of Péter Eötvös, Zoltán Peskó, László Tihanyi, Octav Calleya, Emily F. Brown, Ervin Acél, the Tonhalle Orchester Zürich, David Zinman and, later on, at a course led by Iván Fischer as part of the Schleswig-Holstein Festival.
He himself is a popular performer and educator, having taught the orchestra courses in the music programme at the University of Nagyvárad (Oradea) between 2005 and 2007, in addition to conducting the faculty orchestra. As the permanent conductor of the Nagyvárad State Philharmonic, he also gives solo lecture/concerts for young people.
He worked as the Budapest Festival Orchestra‘s assistant conductor from 2010 until 2015 and currently serves as the permanent conductor of the Nagyvárad State Philharmonic and the Kolozsvár Hungarian Opera. He has conducted in the Stravinsky marathon at Müpa Budapest, in the Primavera programme at the Erkel Theatre, as well as at the Budapest Spring Festival, the Miskolc International Opera Festival and the Kolozsvár Bartók Festival, performing all three of Bartók‘s dramatic works at the latter. He has also had the opportunity to take the podium before such prestigious ensembles as the Konzerthausorchester Berlin, the Schleswig-Holstein Festival Orchestra, Bucharest’s George Enescu Philharmonic Orchestra, the Bucharest Radio Chamber Orchestra and, in Hungary, the MÁV Symphony Orchestra, the Szeged Symphony Orchestra, the Savaria Symphony Orchestra and the Erdődy Chamber Orchestra. He has also conducted numerous opera and ballet performances at the Hungarian State Opera and at the Romanian National Opera in Kolozsvár.