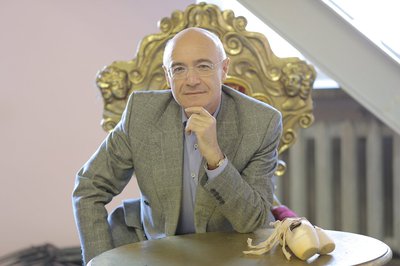 Considered one of the world’s finest ballet teachers, Michael Messerer was born into a great dancing family, in Moscow, where he had his training, first at the Bolshoi Ballet School as a dancer and later at the State College of Performing Arts as a ballet teacher. He has for many years lived and worked in the West, and his method of classical ballet teaching amalgamates the best pedagogical traditions of both Russian and Western ballet. As an International Guest Teacher he is invited by ballet companies around the world, and he has given master classes to American Ballet Theatre, Paris Opera Ballet, Mariinsky Ballet, Béjart Ballet Lausanne, Monte Carlo Ballet, The Australian Ballet, Staatsballett Berlin, Bayerisches Staatsballett, Stuttgart Ballet, Leipzig Ballet, Düsseldorf Ballet, The Tokyo Ballet, Ballet of Vienna State Opera, Ballet of Teatro alla Scala in Milan, Rome Opera Ballet, Ballet of Teatro San Carlo in Naples, Florence Opera Ballet, Ballet of Teatro Reggiо in Turin, Ballet of Teatro Arena in Verona, Ballet of Teatro Colon in Buenos Aires, Moscow Stanislavsky Ballet, English National Ballet, Birmingham Royal Ballet, Royal Danish Ballet, Royal Swedish Ballet, Göteborg Ballet, Cullberg Ballet, Chicago Ballet, Turkish State Ballet, Hungarian National Ballet, and National Ballet of Marseilles, as well as to such schools as the Royal Ballet School and English National Ballet School in London, the Australian Ballet School in Melbourne and the School of Teatro alla Scala. For over twenty-five years Michael Messerer has been working as the Company Guest Teacher with The Royal Ballet of London’s Royal Opera House, Covent Garden. With The Royal Ballet he has toured the USA, Japan, Australia, Germany, Denmark, Greece, Israel, Argentina, Italy, China, Russia, Norway, Singapore and Korea. In May 2009 he was appointed Ballet Master in Chief of the Mikhailovsky Theatre. In 2009 he revived Swan Lake for the company with choreography by Alexander Gorsky and Asaf Messerer, and in 2010 – the world première of the revival of Laurencia, a ballet by Vakhtang Chabukiani. In 2012 he has staged his versions of La Bayadère and Don Quixote at the Mikhailovsky Theatre. The world première of his revival of Vasily Vainonen’s The Flames of Paris took place there in 2013. He staged Le Corsaire after Marius Petipa and Konstantin Sergeyev for the company in 2015. In 2016, he revived for the Company Bournonville's La Sylphide (version by Elsa-Marianne von Rosen), and in 2017 revived Rostislav Zakharov's Cinderella.

The Flames of Paris – ONLINE premiere