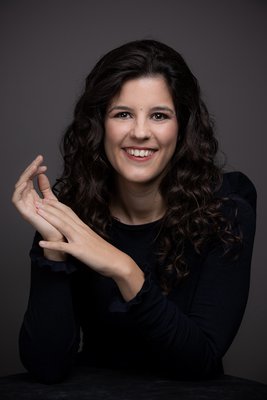 Zsófia Nagy was 11 and a student in the voice course at the Ferenc Erkel Primary School when she started singing in the Hungarian State Opera Children's Chorus, thus gaining familiarity with the genre from an early age. It was then that her passion for opera began, and the point when she embarked on a musical career, studying at music high schools in Budapest and Vác and at the Béla Bartók Music Institute at the University of Miskolc before earning her master's degree in operatic voice and voice pedagogy at the Ferenc Liszt Academy of Music in 2017, under the guidance of Júlia Pászthy.
She has collaborated with numerous excellent artists, including András Almási-Tóth, László Bartal, Gábor Bretz, Dominic Wheeler, Zsuzsanna Giczy, Gyöngyvér Gupcsó, András Hábetler, Katalin Hegedűs Gönczy, Lilian Jászberényi, János Kovács, László Kovács, Ádám Medveczky, Péter Novák, Máté Szabó, Kálmán Szennai, Miklós Szinetár and Gergely Vajda.
She has appeared in a number of productions at the Liszt Academy, including in the title role of Sándor Szokolay's The Girl Who Brings Spring in 2006, as the First Lady in Die Zauberflöte in 2015, Helena in Benjamin Britten's A Midsummer Night's Dream in 2016, and three portrayals in 2017: Malwina in Heinrich Marschner's Der Vampyr, Wendla in Máté Bella's Spring Awakening and Brenda Hendrix in Gregory Vajda and Mark Childress's Georgia Bottoms. She made her debut at the Hungarian State Opera House at 2011, as the Shepherd Boy in Tosca.