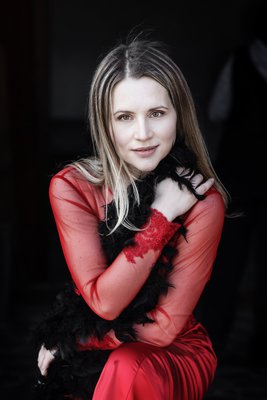 During her studies at the Evangelical Lyceum, the Slovak soprano Linda Ballová already attended Ruthilde Boesch's private master classes in Vienna, and during her studies in the class of Dagmar Livorová at the Bratislava Conservatory, she made her debut at the SND (Magic Flute; 2003). Two years later, she became the laureate of Imrich Godin's MPS IUVENTUS CANTI and won the Andrej Kucharský Award, in the following years also the Suchoň Family Award, the second prize at the Mikuláš Schneider-Trnavský International Singing Competition and the Andreas V. Georgiou Award.
She began her studies at the Academy of Performing Arts in Bratislava as a mezzo – soprano in the class of Zlatica Livorová. During her studies she made her debut at the Košice State Theater (Slovakia) in the 2006/2007 season as Siebel (Gounod: Faust) and continued as Gianetta (Donizetti: L’Elisir d’Amore). Her debut in National Moravian – Silesian Theatre in Ostrava (Czech republic) was in 2007/2008 season as Dryade (R. Strauss: Ariadne auf Naxos), the following season she continued as Siebel and Cherubino (Mozart: Le Nozze di Figaro). At the State Opera in Banská Bystrica (Slovakia) she sang Zelatrice (Puccini: Suor Angelica) and also returned in Slovak National Theatre in the role of Fiodor (Mussorgsky: Boris Godunov).
A major turning point in her career was the change from mezzosoprano to soprano with her successful debut as Milada (Smetana: Dalibor) at Smetana’s Litomyšl Festival (with the National Moravian – Silesian Theatre) in 2009. A year later she sang Mařenka (Smetana: Bartered Bride) both in Slovak National Theatre and National Moravian – Silesian Theatre. The following year she was cast as Donna Anna (Mozart: Don Giovanni) in Slovak National Theatre. With this role she successfully debuted at the festival in Alden Biesen (Belgium). In 2013 she went to State Theatre Aachen (Germany) where she stayed the following 4 years as Rusalka (2013), Jenůfa (2014), Elisabeth in Wagner’s Tannhäuser (2015), Suor Angelica and Giorgetta in Puccini’s Trittico (2016) and Ariadne in Strauss’ Ariadne auf Naxos (2017).
In 2015 she sang the role of Jenůfa also in Slovak National Theatre. During her engagements in theatres she also performed at concerts with José Cura in Bratislava, Ostrava (2014), and later in 2016 in Dubrovnik (Croatia). In 2015 she also debuted as Emilia Marty in Janáček’s The Makropulos Affair directed by Peter Konwitschny in Slovak National Theatre. With the same role she made her debut with the National Theatre Brno in Shanghai (2017). In 2019 she sang as Elisabetta de Valois in Verdi’s Don Carlos in National Theatre Brno and in 2020 she made her successful debut there as Cio Cio Sanin Puccini’s Madama Butterfly.
In 2021 she made her role debut as Tatyana (Tchaikovsky: Eugen Onegin) in National Theatre Brno and in the same year she studied there the role of Mimi (Puccini: La Bohéme).