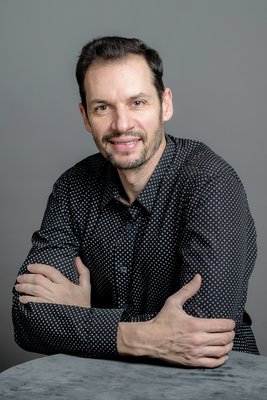 Marcell Bakonyi was born in 1980, in Győr, where he began his voice studies with Ferenc Pintér. He continued his musical training with Margit Ercse at the Leó Weiner Conservatory before moving to Stuttgart in 2002 to study under Júlia Hamari at the Musikhochschule there, graduating with honours in 2007. He won great acclaim with his 2007 portrayal of Lord Sidney in Rossini's Il viaggio a Reims at the Rossini Festival in Pesaro, with Alberto Zedda conducting.
After completing his studies, he first found himself at the theatre in Heidelberg, and in the following year he signed with the Zurich Opera Studio. He has had the opportunity to work with renowned conductors such as Nello Santi, Carlo Rizzi and Ingo Metzmacher. A breakthrough in his career took place in the spring of 2009 at the Schwetzingen Festival, where his performance of the role of Varo in Günther Krämer's production of Handel's opera Ezio met with tremendous acclaim.
Between 2009 and 2013, he was a member of Salzburg’s Landestheater.
He made his Hungarian State Opera debut in 2011 in the role of King Endre II in Bánk bán. The following year saw him take the stage for the first time at the Oslo Opera House, as well as in Colorado, at a music festival. These were followed by the role of Kaspar in a production of Der Freischütz at Theater Giessen and more appearances in Budapest. In 2013, he enjoyed great success singing Leporello alongside Ildebrando D’Arcangelo in Oslo.
He was a member of Staatstheater Nürnberg during the 2016/17 season. The previous summer, he recorded a CD on the Naxos label of Rossini’s Sigismondo, singing the roles of Zenovito and Ulderico, at the Wildbad Rossini Festival. The Hungarian audience got another chance to hear him as Endre II in Bánk bán in September 2017 and later that same season as Figaro in András Hábetler’s production Figaro 2.0, as Mustafà in Rossini’s L’italiana in Algeri and as Porgy in The Gershwins’ Porgy and Bess.