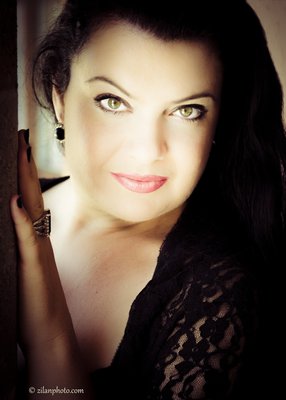 Kornélia Bakos graduated from the Ferenc Liszt Academy of Music in 1999 with degrees in voice pedagogy and voice/chamber music. In 1997, while she was still a student, she was awarded the Award for Hungarian Song. In 2002, she won a special prize at the Sylvia Geszty Coloratura Competition in the Spanish city of Murcia. She participated in the Majk International Opera Course in 1999 and 2002, and in Júlia Hamari's master class in 2003. In 2003, in conjunction with of the Bükk Early Music Course, she presented Handels's opera Xerxes in the town of Bélapátfalva. In the summer of 2003, she took the stage for the first time as an invited artist of the Hungarian State Opera's Opera Studio in the title role of Handel's Giulio Cesare. She remained a member of the studio from 2003 until 2006, training under Géza Oberfrank and Emil Petrovics, among other mentors. She made her Opera House debut in 2004, as Third Lady in Die Zauberflöte, a role she has regularly repeated since. She has sung the roles of Ines (Il trovatore), the High Priestess (Aida), Giovanna (Rigoletto), the Neighbour (in Stravinsky's Mavra) Sylvia (in Levente Gyöngyösi's The Stork Caliph), Tisbe (La Cenerentola). In 2006, she received the Wagner Society's Bayreuth scholarship. She regularly works with the Budapest Chamber Opera and the Savaria Baroque Orchestra (under artistic director Pál Németh), with Soma Dinyés and the Ars Longa Chamber Ensemble, with Milos Velent and the Solamente Naturali Baroque orchestra, with Kamp Salamon and the Weiner-Szász Chamber Orchestra, as well as with the Budapest Strings Chamber Orchestra. She also regularly performs as a soloist alongside Liszt Award-winning organist András Virágh. During her years at the Opera Studio, she collaborated with such masters as Ervin Lukács, János Kovács, Ádám Medveczky, Ferenc Nagy and István Dénes. Since 2006, she has been a regular participant in Ádám Fischer's Wagner in Budapest Opera Festival at Müpa Budapest, where she portrays Grimgerde in Die Walküre. In 2007, she and violinist colleague István Kerek founded the Perle della Musica chamber ensemble in order to share their experiences in Italy with the Hungarian audience, making the gems of Baroque music even more thrilling through the application of the “Venetian style”. In 2007, she won both first prize and a special prize at the International Handel Competition in Eger, and shortly thereafter joined Italy's I Virtuosi delle Muse Baroque orchestra (conducted by Stefano Molardi), with whom she regularly makes appearances as a soloist all over Europe. Between 2007 and 2008, she was the beneficiary of the scholarship from the Hungarian State Opera's foundation in support of young talents, and in 2008, as a finalist in the Musica Sacra competition in Rome, gained a place in the I Virtuosi della Musica Sacra ensemble (conducted by Daniela de Marco). The competition also led to the opportunity to work with Maestro Riccardo Muti in Piacenza. In 2009, taking the stage in Ravenna as the sole singer from outside Italy, she performed in Vivaldi's Opera Tito Manlio with the Baroque orchestra Accademia Bizantina conducted by Stefano Montanari. Recent years have also seen her appearing in more and more Baroque concerts and performances in Hungary. In the summer of 2013, she sang in Bach's Mass in B minor under the baton of Helmuth Rilling. She has been a member of the Hungarian National Choir since 2004, and has served as its vocal coach since 2011. Her current teacher is Judit Németh.