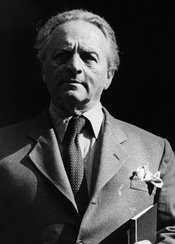 (1884-1949)
Béla Balázs was born in Szeged, but his family moved to Lőcsér when he was six. After the death of his father, high school teacher Simon Bauer, they returned to his mother's native Szeged. In 1902, he enrolled at Pázmány Péter University in Budapest to study Hungarian and German, and also shared a room with Zoltán Kodály at Eötvös College. After completing his studies in 1906, he embarked on an international study tour. At the University of Berlin, he attended Georg Simmel's philosophy lectures. He wrote his first book, The Aesthetics of Death, and in 1908 launched his career as a poet when he published his works in the anthology Tomorrow. He also published articles in the journal The West. His early work in aesthetics and his art nouveau-style fairy-tale plays brought him attention. His first work for the stage, titled Doctor Margit Szélpál, was premiered in 1909. He spent an extended period abroad in 1911 and 1912 (in Italy, Paris and Berlin), and his first volumes of verse were also published. He volunteered for the front in 1914 and was wounded. His wartime diary was published in 1916. After joining the Directorate of Revolutionary Writers in 1919, he fled to Vienna with the collapse of the Hungarian Soviet Republic. He worked for several German- and Hungarian-language journals, and also published volumes in both languages. Publishing theatre and film reviews in both daily and weekly periodicals, he later revised these and published them in his 1925 masterwork on film aesthetics, Visible Man. From 1926 until 1930, he lived and worked in Berlin together with Erwin Piscator and Georg Wilhelm Pabst. He got to know Leni Riefenstahl and wrote scripts for several of the actress' films. He also joined the German Communist Party, and in the autumn of 1930 was invited by Soviet writers to travel to Moscow in order to write to direct a film about the Hungarian Soviet Republic. In 1932, he settled in Moscow and taught at the city's film school, also serving as managing editor of New Voice, a Hungarian-language periodical published in Moscow, from 1938. Returning to Budapest in 1945, he continued his activities as a film-maker, teacher and editor, also working as a guest professor in Prague and Rome. He also published his autobiographical novel Dreaming Youth, while the film Somewhere in Europe, directed by Géza Radványi directed and based on Balázs's script, received great acclaim. Although he was awarded the Kossuth Prize, he was subject to severe criticism after 1948 for his supposedly avant-garde approach, in parallel with the fall from favour of György Lukács and his previously leading ideological role. He lost his positions and was prevented from continuing to teach at the Academy of Theatre Arts, while his works remained unpublished. Only decades after his death was his life's work – particularly his efforts in film aesthetics – given its proper place. The diary he kept from 1903 until 1922 could only be published in 1982, and even then only with major cuts. He died in 1942 and is buried in the Pantheon of the Workers' Movement in Kerepesi Cemetery. Balázs supplied the librettos for Béla Bartók's opera Bluebeard's Castle and ballet The Wooden Prince and for Kodály's opera Czinka Panna, as well as the script for Géza Radványi's film Somewhere in Europe. He also did lasting work in the field of film aesthetics. An award was established in his honour, which Hungary's minister of national cultural heritage presents in recognition of outstanding creative work in the area of motion pictures or for artistic or scholarly accomplishments.