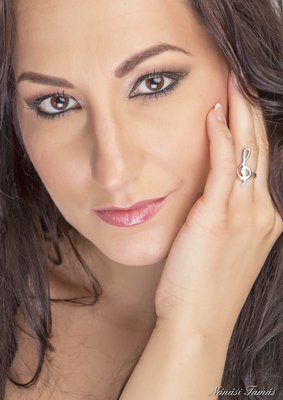 Gabriella Balga first attended music school in Nagykürtös (Veľký Krtíš) and later in Ipolyság (Šahy), starting as a soprano at age 7 before switching to the alto recorder, which from age 12 she continued to study alongside pursuing the classical solo voice programme. Her first singing teacher was Angéla Michňa. As a child, she frequently participated in folk song competitions, achieving outstanding results. After studying at the Fegyverneki Ferenc Catholic High School in Ipolyság, she attended the solo voice programme a the Pikéthy Tibor High School of Music in Vác under the tutelage of Ilona Bakonyi. In 2005, she enrolled at Budapest's Béla Bartók High School of music, where her voice teacher was Mária Fekete. In 2008, she gained admission to the classical voice course at the Ference Liszt Academy of Music, where she earned a bachelor's degree (2008-2011) in classical voice and a master's degree (2011-2013) in opera voice under senior professor Éva Marton, while the opera programme was headed by director András Almási-Tóth. Serving as her voice teacher throughout her university years was Júlia Pásthy, with whom she continues to work. Between 2012 and 2013, she earned a degree in opera voice pedagogy under senior professor Katalin Halmai. She has participated in master classes held by Walter Moore, Nicholas Clapton, Yevgeny Nesterenko, Gwynne Geyer, Béla Perencz and Ildikó Komlósi.
She has been a soloist with the Hungarian State Opera since 2012, making her debut there in the role of Mátyás Hunyadi in Ferenc Erkel's opera Hunyadi László, with a CD recording also being made of its original version. In addition to playing minor characters, she also sings principal roles such as Rosina (in Il barbiere di Siviglia, including in the Opera's 2015 tour of Japan) and Dorabella (in Così fan tutte). She regularly makes guest appearances both abroad and in the theatres of Hungarian cities outside of Budapest. She has partnered with such illustrious singers as Andrea Rost, Eszter Sümegi and Erika Miklósa, and has also received the opportunity to work with conductors like Zoltán Kocsis, Tamás Vásáry, Gábor Takács Nagy, Bertrand de Billy, Pinchas Steinberg, Stefan Soltész, Douglas Boyd, Péter Halász, Gergely Kesselyák and János Kovács. In addition to her opera repertoire, she also readily sings oratorios and gives song recitals.
She is the winner of several international singing competitions and of numerous scholarships and awards. In 2010, she received the Ari Kupsus Stipendium, an award for talented students at the Liszt Academy. In 2011, she took second place at the József Simándy International Singing Competition and first place at the Iuventus Canti International Singing Competition, in addition to winning the prize for best performer. 2012 saw her win the Gundel Award and the Ari Kupsus “Dream” award for outstanding achievement by a talented young singer studying at the music academy. Also in 2012, she received the prize established by Mr and Mrs Andor Mándy, which recognises outstanding achievement on the part of young singers working at the Opera. In 2013, the Wagner Society bestowed its Bayreuth scholarship on her, and she took first place at the Jakub Pustina International Singing Competition in 2015.