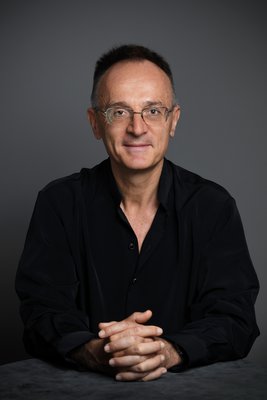 He was born in Budapest in 1962, and continued violin, piano and organ studies at elementary music school. He studied choir leading at Liszt Ferenc Academy of Music from 1980 to 1985, studying with masters including Péter Erdei, József Maklári and Kamilló Lendvay. He graduated at the conductor training course in 1990, where his master was Ervin Lukács. He participated in Yuri Simonov's, Kurt Sanderling's (Weimar) and Helmuth Rilling's (Leipzig) master classes. From 1986 to 1990 he was the conductor of the Budafok Youth Orchestra, the predecessor of Ernő Dohányi Symphony Orchestra. He joined the Hungarian State Opera House in 1986 as a répétiteur-conductor. He also worked as a rehearsing conductor in Augsburg between 1990 and 1993. From 1994 he worked for the Csokonai Theatre, Debrecen as principal conductor, and from 1999 to 2001 as musical director. He was artistic director and conductor with the Symphony Orchestra of the Budapest Technical University from 1994 to 2002 and the Szabolcs County Symphony Orchestra, Nyíregyháza from 1997 to 2003. Between 2002 and 2004 he was the head of the Opera Department at Liszt Ferenc Academy of Music, and musical director with the Miskolc National Theatre from 2003 to 2007. Besides numerous orchestras in the country (Szeged, Pécs, Szombathely), he has conducted the Orchestra of the Budapest Philharmonic Society and the Budapest Symphony Orchestra, and made several radio recordings with the latter.