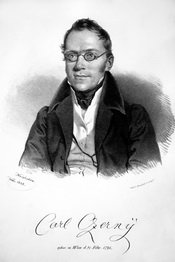 
(1791-1857)
Austrian composer and music educator.
Czerny lived and worked in Vienna. An extremely talented pianist, he studied under Antonio Salieri and, between 1801 and 1803, with Beethoven, with whom he enjoyed a close relationship afterwards as well. It was later as a piano teacher, rather than as a concert pianist, that he established his reputation. He taught from the age of 15 and thus played a major role in passing down Beethoven's legacy. Many famous virtuosos studied with him, including Ferenc Liszt, Sigismund Thalberg and Theodor Leschetizky. He was a prolific composer, particularly of piano exercises and etudes, which piano students continue to use today. Including his transcriptions, he produced around a thousand pieces, including 24 masses, four requiems, along with symphonies, overtures and chamber works. He is best remembered, however, for his pedagogical compositions. Czerny was the first to use the word “etude” as the title of a work.
He also collaborated for a while on the complete edition of Bach that was in progress at the time, and also both wrote and translated essays on music theory.