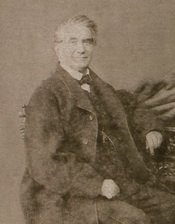 (1802-1870)
Césare Pugni was born in Genoa in 1802 and studied at the Milan Conservatory of Music. While in Milan he contributed music for ballets, then Elerz e Zulmida (1826) was the first work composed completely by him. From 1832-1834 he was maestro al cembalo and music director of La Scala. Then he went to Paris where he became director of the Paganini Institute and was briefly associated with Bellini. During this time he composed The Devil’s Fiddle, The Marquitante, The Marble Maiden, and Stella, ou Les Contrebandiers (1850). In 1843, he began a long collaboration with Jules Perrot at Her Majesty’s Theatre in London. Unquestionably gifted, Pugni always worked in a great hurry and on specific order from customers he was forced to satisfy, hence the crudeness of his music. In 1851, Pugni went to St. Petersburg from London where he had been staff composer of ballet music at the Royal Covent Garden Opera House. In Russia, he was staff composer at the Imperial Ballet, and, during his nineteen years there, composed thirty-five ballets and a great number of individual dances. Among his outstanding compositions were La Esmeralda (1844), The Little Hump-backed Horse (1864), Daughter of Pharaoh (1862), Catarina, ou La Fille du Bandit (1846), Armide, contributions to Adolphe Adam’s score for Le Corsaire (1856), Pas de Quatre (1845), Paquerette, Faust (1854), and King Candaule. As a composer, Pugni’s output numbered 312 ballets, ten operas, and forty Masses. He died in St. Petersburg in 1870 at the age of 68.