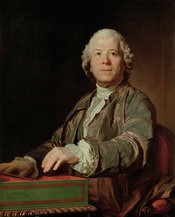 (1717-1787)
Christoph Willibald Gluck was a German composer. In 1732, he began attending the University of Prague, where he studied music and philosophy. In 1735 he travelled to Vienna under the patronage of Prince von Lobkowitz. There, he caught the eye of Prince Melzi, who took him to Milan and hired him for his private orchestra, where Gluck probably studied together with Giovanni Batista Sammartini. In 1741, he wrote his first opera, titled Artaserse, which was followed by seven other operas over the next three years. In 1745, Gluck travelled with Prince von Lobkowitz to London, where he presented two of his operas, met Handel, and gave two concerts, in which he played on the glass harmonica. After 1746, he travelled to Austria, and then to Denmark, while also visiting Prague and Naples. In 1754, Empress Maria Theresa appointed him conductor and composer of the Vienna court theatre. This position demanded that he compose in the much more flexible and agile style of French opéra comique. Between 1755 and 1761, he collaborated closely with Giacamo Durazzo, the intendant of the court theatre, the scenographer Giovanni Maria Quaglio, the dancer Gasparo Angiolini and the poet Ranieri de' Calzabigi. It was together with the latter that he developed his opera reforms. One of his most important principles was to have the needs of the singers subordinated to the dramatic requirements of the given piece, one of the results of which was the replacement of the secco recitativo by the less fixed recitativo accompagnato. The first examples of these new principles were the ballet Don Juan (1761) and the opera Orfeo (1762), and they attained their greatest expression in 1767's Alceste. This opera can be considered the antecedent to Wagnerian music drama.
After retiring from his position at the Viennese court in 1770, he went to Paris in 1773, where he was commissioned to compose the opera Iphigeneia in Aulis. This was followed in 1774 by Orfeo, and two years later by the creation of the French version of Alceste. Not everyone smiled upon Gluck's Parisian successes, and this led to moves being made against Gluck in favour of the Italian composer Piccini, who was asked to write an opera to the same libretto that Gluck was widely known to be working on. Gluck then destroyed the outlines he had created for it and instead wrote Armide (1777), which was followed by Iphigeneia in Tauris in 1778. He returned to Vienna in 1779 and lived there in prosperous retirement.