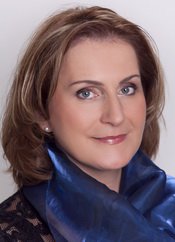 Veronika Dobi-Kiss earned her degree in chamber performance and solo voice pedagogy in Győr in 1996. Between 1995 and 1997, she gained theatrical experience as a member of the National Theatre of Győr's chorus. In 1996, she took third place at the Jenő Ádám Song Competition, where she also received a special prize providing her with the opportunity to perform a concert in Italy. She spent the years from 2001 to 2003 completing the voice course at the University of Szeged, where for her opera examination she sang the part of the Princess in Puccini's opera Suor Angelica. After winning the Wagner Society's Bayreuth scholarship in 2002, she also went on to earn three special prizes at the József Simándy Singing Competition the following year. She taught solo voice at the János Richter High School of Music in Győr from 2001 until 2013, when she moved on to teach the same subject at Budapest's Béla Bartók High School of Music. During her years in Győr, she was an active participants in the musical life of the local diocese, and performed as a soloist in numerous concerts and CD records in the Basilica of Győr. Ever since 1997, she has regularly received invitations to perform in concerts both in Hungary and abroad, and in 2011 she gave a solo concert accompanied by the MÁV Symphony Orchestra in the Assembly Hall of the Hungarian National Museum. She has performed in various operas on various occasions in Szombathely and at the Miskolc Opera Festival. She made her Hungarian State Opera House debut in 2013, in Verdi's Stiffelio. Her singing teachers have included Ilona Adorján, Erzsébet Komlóssy, Krisztina Laki, Judit Németh and Mária Temesi. In 2011, she was presented with the Artisjus Award in recognition of her pedagogical work. Her principal operatic roles consist of Mercedes (Carmen), Örzse (Háry János), Dorothea (Stiffelio), Larina (Eugene Onegin), Brigitta (Die tote Stadt), Lucia (Cavalleria rusticana), Giovanna (Rigoletto), Emilia (Otello), the Innkeeper (The Fiery Angel) and the Abbess (Suor Angelica). Her concert repertoire includes Vivaldi's Gloria, Pergolesi's Stabat Mater, Bach's Christmas Oratorio and Easter Oratorio, Mozart's Coronation Mass and Requiem, Beethoven's Ninth Symphony, Liszt's Coronation Mass, Rossini's Stabat Mater, Brahms's Liebeslieder Waltzer, Schumann's Frauen-Liebe und Leben and Wagner's Wesendonck Lieder.