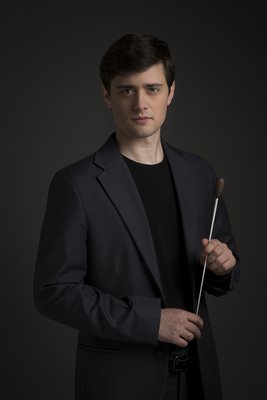 Peter Dobszay was born in 1990, he is a prominent figure among a young generation of conductors, a regular conductor of the Szolnok Symphony Orchestra, the first organist of the Dohany Street Synagogue and the Church of Holy Angels in Gazdagrét; one of the most versatile musicians of his generation. He gives concerts worldwide, he has performed in Japan, Israel, Germany, Switzerland, Czech Republic, Romania, Austria and Macedonia. He has played the organ in such prestigious venues as St. Stephen's Cathedral in Vienna, the Basilica of the Holy Sepulchre in Jerusalem, the Music Academy of Geneva and Leipzig, and at home in the Great Hall of the Palace of Arts (Müpa Budapest) and the Music Academy, as well as the Kodály Centre in Pécs. He graduated from the Liszt Ferenc Music Academy as an organist and conductor, during his studies he was admitted to the university's Talent Programme, where only young artists are enrolled who have a future in an international concert career. He attended organ courses given by Olivier Latry and Christoph Bossert, as well as the conductor course of Peter Eötvös. He has conducted concerts including the Pannon Philharmonic Orchestra, the MÁV Symphonic Orchestra, the Szeged Symphony Orchestra, the Savaria Symphony Orchestra and the Mendelssohn Chamber Orchestra. He regularly conducts oratorio concerts in response to church requests. He considers a contemporary music presence in concert halls of vital importance, so with pleasure he conducted the first concert of the Studio 5 formation in 2017 in the Solti Hall of the Music Academy.