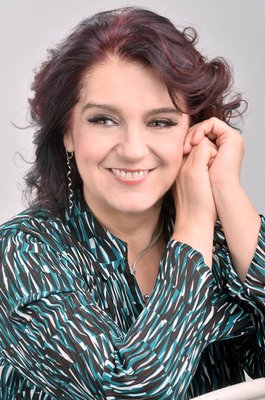 
Mária Farkasréti was born in Veszprém and commenced her studies in music at Csermák Antal Music School as a student of Károly Ötvös. In 1986, she gained admission to the Béla Bartók Conservatory of Music, where Zsuzsa Németh was her teacher in her area of specialisation. Later on, she would continue her music studies privately. Her most pivotal teachers were Margit Kaposy and László Kéringer. Between 1988 and 1996, she sang in the chorus at the Hungarian State Opera's Erkel Theatre, including as a demi-soloist after 1990. In 1992, after winning the scholarship from the Csokonai Theatre of Debrecen, she made her debut there in the title role of Tosca. In 1996, Tamás Pál signed her as a soloist with the National Theatre of Szeged's opera company. She made her Budapest debut as Senta in 1999 and made regular guest appearances in the Netherlands, France, Spain, Portugal, Germany and Austria. Illness then interrupted her career for several years, but after recovering she returned to the stage in 2005 in the role of Donna Elvira. Since her return, she has worked as a freelance soloist.
Her principal roles include the Countess (Le nozze di Figaro), Donna Elvira (Don Giovanni), Despina (Così fan tutte), First Lady and Second Lady (Die Zauberflöte), Leonora (Il trovatore), Abigaille (Nabucco), Amelia (Un ballo in maschera), the title roles of Tosca, Turandot and Manon Lescaut, as well as Santuzza (Cavalleria rusticana) and Senta (Der fliegende Holländer). In recent years at the Opera House, she has debuted the roles of Jenny in Dohnányi's Der Tenor, also collaborating in the recording of that work, the Empress in Kodály's singspiel Háry János, Signora Angiolieri in János Vajda's opera Mario and the Magician, the Countess of Coigny in Andrea Chénier and La Ciesca and Sister Zelatrice in Puccini's Il trittico. Also included in her repertoire are the soprano solos in the requiems of Mozart, Verdi and Dvořák requiems and the oratorio soprano parts in Bach's Saint John Passion and Handel's Messiah, as well as song cycles (such as Wagner's Wesendonck Lieder).