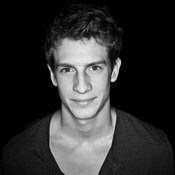 Balázs Benő Fehér was born in Hódmezővásárhely in 1990 and enrolled at the University of Theatre and Film Arts in 2009 to study acting under Gábor Zsámbéki and Sándor Zsótér. Alongside his academic obligations, he also participated in creating several independent productions, both as an actor and as a director. As an actor, he has worked in productions directed by Sándor Zsótér, Péter Forgács and Róbert Alföldi, to mention a few. The first production he directed was based on the novel Crime and Punishment: the work he staged together with dramaturg Ádám Fekete in 2012 was one that could only be watched by a single viewer at a time. He directed Brian Friel's Faith Healer at the Ódry Stage in 2013, followed the next year by Boris Vian's L'Écume des jours. (Both productions were also staged as part of the off-programme at the National Theatre Festival in Pécs). He directed The Seagull at the Átrium Film Theatre (2015) and presented Emilia Galotti at the Katona József Chamber Theatre (2016). He first worked at the Opera House in 2014, directing Donizetti's one-act Il campanello.