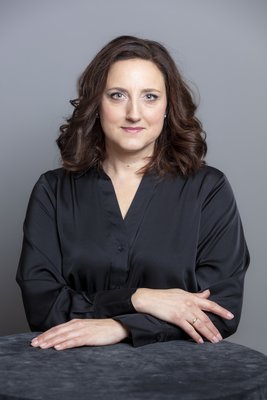 Gabriella Fodor completed her studies in the Ferenc Liszt Academy of Music's Department of Vocal and Opera Studies, where her teachers were Éva Andor, Balázs Kovalik and Judit Németh. In addition, she attended master classes held by Anna Reynolds, Krisztina Laki, Júlia Hamari, Ralph Döring and Martina Veh. She made her debut with the Hungarian State Opera in the 2004 Hungarian premiere of Britten's opera The Turn of the Screw, singing the role of Miss Jessel. Since then, she has taken the stage at the Opera as a guest artist in such roles as Pamina, Silvia, Romilda, Michaela, Desdemona, Mimì, Margherita-Elena and Mamaine Koestler.
She regular appears at festivals both in Hungary and abroad. She sang the title role in Kamilló Lendvay's opera La Putain respectueuse at the Budapest Autumn Festival, the role of Tatyana at the Bartók Plusz Opera Festival in Miskolc, and the role of the Countess in the Budapest Spring Festival's Mozart Marathon production. Since 2008, she has regularly participated in the Wagner in Budapest Opera Festival, singing the roles of Waltraute and Wellgunde in its production of the Ring, and in 2011 made a guest appearance in Copenhagen, singing the female lead in Mozart's opera Ascanio in Alba. In addition, she has collaborated as a soloist in numerous oratorios and concerts, including in Mozart's Requiem, Frigyes Hidas's Requiem, Beethoven's Symphony No. 9 and Grieg's Peer Gynt.
She has worked together with such renowned conductors as Ervin Lukács, Adam Fischer, Zoltán Kocsis, Zoltán Peskó, Carlo Montanaro, Zsolt Hamar, Tibor Bogányi, Ádám Medveczky, Gábor Hollerung and Péter Oberfrank.
She won the Artisjus Award in 2003 and the Dr. Andor Mándi Award in 2009.