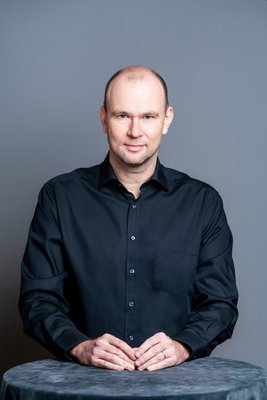 Péter Halász was born in Budapest, where he studied piano and music composition, later going on to earn his diploma in conducting at Vienna's Universität für Musik und darstellende Kunst as a student of Leopold Hager. He has also been a student at master courses held by Bernard Haiting, and worked as assistant to Ádám Fischer at the Haydn Festival Eisenstadt in Austria. He was employed as a répétiteur at Opernhaus Zürich, and then at Staatstheater Mainz, first as principal répétiteur, and later as a conductor. Later on, he became assistant principal music director and principal conductor with the Theater Aachen and Aachen Symphony Orchestra. He started conducting regularly, as a guest, at the Hungarian State Opera in 2010, and then was named acting principal music director in 2013. From April 2014 to March 2016 he has served as the Opera's principal music director. His repertoire includes more than 40 different operas ranging from the Baroque to contemporary works. In the 2015/16 season, he was continuing the task of premiering Wagner's entire Ring tetralogy with Die Walküre, in the 2016/17 season with Siegfried. His premiere of Thomas Adès's The Tempest brought to Budapest, after long years, a production of an internationally acclaimed contemporary opera. In addition, during the course of the 2015/16 season he has made his debut at the Staatsoper Hamburg (with Puccini's Manon Lescaut) and with the Hungarian National Philharmonic Orchestra, among others. He received the Gold Cross of Merit of the Republic of Hungary (civilian division) in 2017.