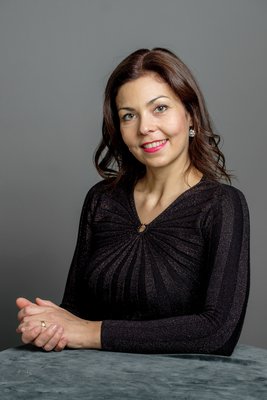 The Budapest-born mezzo-soprano graduated as a major in Solo Singing from the Liszt Ferenc Academy of Music’s Institute for Teacher Training in Budapest in 2008 after having completed her studies at the Eötvös Loránd University Faculty of Humanities, majoring in French and Portuguese. Her current master is Bernadett Wiedemann, and she regularly worked with Júlia Hamari between 2003 and 2011. In 2013, she was awarded the grand prize at the 8th József Simándy International Singing Competition. That same year, she also managed to secure a scholarship from the Richard Wagner Society in Bayreuth. In 2014, she was a finalist in the Competizione dell’Opera held in Tashkent as well as in the Armel Opera Competition in 2017, going on to sing the role of Albertine (Dobrzyński: Operetta)in the Viennese Theatre MuTh and on the stage of the Warsaw Chamber Opera.

She has performed abroad on countless occasions, including her debut in singing the role of Palmatica (Der Bettelstudent)at the Rheinsberg Chamber Opera festival and later at the State Theatre of Braunschweig. In 2013, she sang the roles of Fricka and Flosshilde on the stage of the Europasaal in Bayreuth as part of a production of Ring an einem Abend, which is an abridged version of Wagner’s Ring cycle.

2015 saw a glorious performance as Dorabella at the Aalto Musiktheater in Essen. At the invitation of the Hungarian Opera in Cluj Napoca, audiences were delighted by her performance as Prince Orlovsky in 2019, and in 2020 she sang Carmen as a guest of the Oradea State Philharmonics.

She debuted on the stage of the Hungarian State Opera in 2012 with the role of Dorabella, and has since sang, among others, the roles of Cherubino (Le nozze di Figaro), Mercedes (Carmen), Lola (Cavalleria rusticana), Flosshilde (Das Rheingold), High Priestess (Aida),Urbain (Les Huguenots), Zulma(L'italiana in Algeri), Hunyadi Mátyás (Hunyadi László), Flora Bervoix (Traviata) and Tebaldo (Don Carlos).