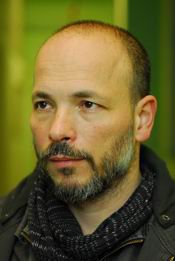 Péter Horgas was born in Budapest in 1963 and earned his degree in set and costume design in 1988 after studying under László Székely at the Hungarian Academy of Fine Arts. Between 1988 and 1996 he was a set and visual designer for Hungarian Television. Since 1988, he has designed sets for nearly every theatre in Hungary. Between 1991 and 1997 he was the head designer for Veszprém's Petőfi Theatre, and from 2001 to 2007 was the designer for the Atlantis Theatre and Béla Pintér and Company. In 2003, he was creative director of the National Theatre. Between 2008 and 2009 he was head of the AKKU cultural and equal opportunity site, and from 2009 to 2012 served as an editor and presenter for Radio Q. Teaching courses in the visual design department of the Hungarian University of Fine Arts from 2006, he has been an instructor at the Budapest College of Communication since 2014. His work has been recognised with various awards both in Hungary and abroad: he has won the National Theatre Festival's award for best set three times (in 1991, 1995 and 2001), and has also received awards at Debrecen's Deszka Festival (2007), Nyíregyháza's Vidor Festival (also in 2007), in Rijeka (2009), and has also won the Dömötör Award at the National Theatre of Szeged (2008). He was responsible for the visual design of more than 40 advertisement films and nine film dramas, including Samba, May Day Mayhem! and Colossal Sensation, with another, Fever at Dawn, winning the award for best film drama at the Cinequest Film Festival in 2016. He has had several exhibitions in Budapest, Prague and Pécs. In recent decades, he has designed the scenery for nearly 150 productions in various theatres around Hungary. In addition to the ones already mentioned, he has also worked at the Katona József, Pest, József Attila and Comedy theatres, at the Budapest Chamber Theatre, at the National, Örkény and Radnóti theatres, at Müpa Budapest, and also in Pécs, Nyíregháza, Szeged, Gyula, Szentendre and Szombathely. His first job at the Opera House was 2009's Sonnenfinsternis, followed by Macbeth (2011) and Die Zauberflöte (2014).