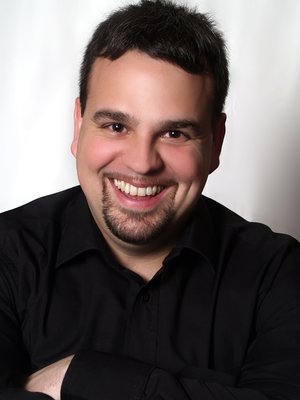 He earned his diploma in voice at the University of Pécs in a course taught by Márta Bukszár. Meanwhile, his career as an opera singer was launched with the opera company of the National Theatre of Pécs, and he later made his debut in the role of Count Almaviva in Rossini's The Barber of Seville in Miskolc. He sang the title role in Le compte Ory to great acclaim at the National Theatre of Szeged and at the Budapest Spring Festival, and later went on to sing the entire bel canto tenor repertoire, such as Ernesto (Don Pasquale) and Fenton (Falstaff), and other tenor roles like Fenton (Nicolai's The Merry Wives of Windsor) and Rodolfo (La bohème). As a regular guest artist with the National Philharmonic Orchestra under the baton of Zoltán Kocsis, he has appeared with them in Brussels and Rome, where he sang for Pope Benedict XVI on the occasion of the 200th anniversary of Ferenc Liszt's birth. In the course of his work with the orchestra, he has performed in such rarities as Schönberg's Moses und Aron (in the role of the Youth) and in Richard Strauss's Daphne (as Leukippos). He has been a soloist with the Hungarian State Opera since 2010. In addition to appearances and recitals here in Hungary, he has sung across Europe, as well as in both North and South America. He has been a guest soloist with several orchestras and an acclaimed participant in such festivals as the Budapest Spring Festival, the International Bartók Festival in Szombathely, the Bartók Plus Opera Festival in Miskolc, the Margaret Island Open-air Festival and VeszprémFest. In 2012 he was invited by György Selmeczi and the Cluj-Napoca Hungarian Opera to sing the title role in the CD recording of György Orbán's opera Prince Pikkó. In his work on the opera stage, he has collaborated with such renowned artists as Andrea Rost, Erika Miklósa, Zoltán Kocsis, Juan Pons, Roberto Scandiuzzi and Roberto Abbado.