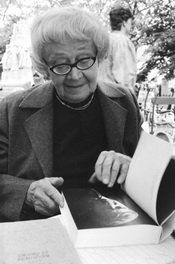 
(1909-2003)
Attila Jószef Award-winning poet and literary translator Amy Károlyi was the wife of Hungarian poet Sándor Weöres. After graduating from Budapest's Pázmány Péter Catholic University with a teaching degree in Hungarian and German, she continued her studies in Vienna. She was elected a member of the Hungarian Academy of Arts in 1992. Her first poems were published in the eminent literary journal Nyugat (West), by editor-in-chief Mihály Babits in 1940. She wrote fairy tales, children's books and rhyming picture books while also doing significant work as a literary translator. She was recognised with numerous awards, receiving the Attila József Award in 1981, the Middle Cross of the Order of Merit of the Republic of Hungary in 1994, the János Arany Award in 1996 and the Salvatore Quasimodo Award for Lifetime Achievement in 1997.