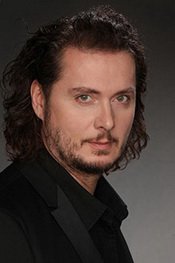 He studied painting at the Hungarian Academy of Fine Arts at the Faculty of Painting and had master class at the Faculty of Mural painting. Since the end of the 80’s his paintings regularly appear on solo and group exhibitions. As a multimedia artist, Kentaur had interest on different fields of art from his early ages. Parallel to his fine art studies, he became the solo singer and songwriter of a new wave music group and later – as a solo singer – he recorded several rock albums between 1989 and 2005. He started his theatre career as a graphic designer, later becoming a set and costume designer. Since 1990 he worked for all major Hungarian prosaic theatres as well as for musical, opera (Faust, Turandot, Aida etc.), ballet (Snow White and the 7 dwarfs – Budapest, Tallinn, Coppélia – Wiener Staatsoper, The Nutcracker – Budapest etc.), television and movie productions. He was the first stage designer in Hungary, who used interactive, live video techniques on stage. He is remarkable praised for his visual designs made for Shakespeare-performances (Macbeth, Hamlet, As You Like It) and musicals (Producers, Joseph, West Side Story, Peter Pan, Footloose, Chicago, Cabaret, etc.). His international theatre designer career has begun in 1995 when the famous British producer, Cameron Mackintosh appointed him to redesign his world success musical productions: Miss Saigon, Phantom of the Opera, Oliver and Martin Guerre. Since than he has worked all over Europe and overseas as well (Great Britain, Austria, Slovakia, Czech Republic, Romania, Denmark, Sweden, Norway, Estonia, Belgium, Australia, Japan, Philippines, New York, St. Petersburg and Rostov.) He debuted on the London West End with Rent in 2002 in Prince of Wales Theatre. He is the permanent set designer of the Hungarian non-replica productions of Andrew Lloyd Webber’s and Claude-Michel Schönberg’s musicals. Several theatre awards acknowledged his stage visions. In 2007 he was granted a Jászai Price and in 2013 Honourable Artist prize from the Hungarian State for his oeuvre in theatre art.