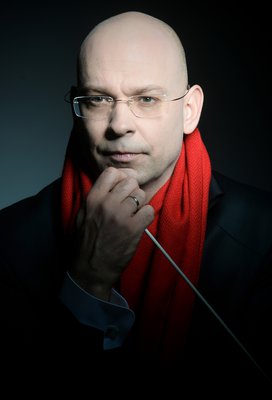 Gergely Kesselyák graduated from the Ferenc Liszt Academy of Music in 1995 as a student of Ervin Lukács, after also taking part in two of Yuri Simonov's master classes. He took third place at the Arturo Toscanini International Conducting Competition in Parma in 1994 and third prize at the MTV International Conducting Competition in Budapest in 1995. Since 1993, he has been a regular fixture at the helm of Hungary's leading symphony orchestras, including the Hungarian National Philharmonic, the Budapest Philharmonic, the Hungarian Radio Symphony Orchestra, Concerto Budapest (previously known as the Matáv Symphony Orchestra) and the MÁV Symphony Orchestra. He was the head of the Hungarian Radio Youth Orchestra from 1995 until 1997, when he established the opera department of the National Theatre of Miskolc, whose musical director he remains. In 2001, he also became the founding music director of the Bartók Plus Opera Festival. He started guest conducting at the Hungarian State Opera in 1994, and has been a regular conductor there since 2001. He also took up the artistic director posts of the Budapest Summer International Opera and Ballet Festival in 2004 and, from 2005 until 2012, of the Szeged Open-Air Festival. Since 1993, he has conducted more than one hundred productions at 12 different musical theatres (the Hungarian State Opera, the Budapest Operetta Theatre, the Hungarian Opera of Kolozsvár [Cluj-Napoca], the national theatres of Szeged, Miskolc, Győr and Pécs, Debrecen's Csokonai Theatre, Szolnok's Szigligeti Theatre, Veszprém's Petőfi Theatre, Kecskemét's Katona József Theatre and Kaposvár's Csiky Gergely Theatre). He resumed the musical direction of the Bartók Plus Opera Festival in 2011 and established the Bartók Plus Opera Writing Competition in 2013.
Kesselyák was appointed the Hungarian State Opera's first conductor in 2016. He has also made guest appearances in numerous countries (Ukraine, Romania, Slovakia, the Czech Republic, Croatia, Serbia, Germany, Austria, Italy, France, Spain, Egypt, Japan, Chile, Peru, Oman and China). Since 1999, he has also been involved in directing, having staged Verdi's Rigoletto and Nabucco, Donizetti's L'elisir d'amore, Bartók's Bluebeard's Castle and Puccini's Turandot and Tosca. At the Opera House, he has staged Don Giovanni. His production of Nabucco was performed at the Szeged Open-Air Festival to great acclaim.
He received the Liszt Award in 2005 and was named an Artist of Merit in 2012.