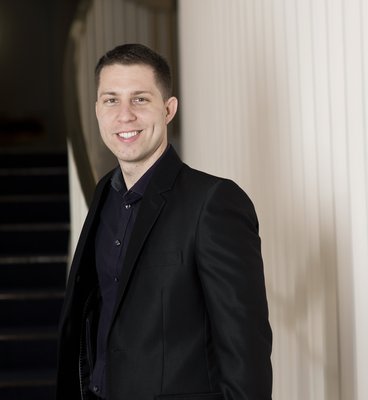 Tivadar Kiss was born in the Serbian town of Kikinda in 1986 and attended the music high school in Szabadka (Subotica), where he studied music theory and voice. He completed his education in Budapest in 2010, after studying opera voice in the course headed by Balázs Kovalik at the Ferenc Liszt Academy of Music. His voice teacher is Éva Andor. He made his stage debut at the Mozart Marathon in 2007, singing the role of Don Basilio in Le nozze di Figaro. At the 2009 Budapest Spring Festival, he sang Aret in a concert version of Joseph Haydn and Konstantia Gourzi's Philemon und Baucis at the Hungarian Railway Museum. He made his debut at the Opera House in the role of Triquet in Tchaikovsky's Eugene Onegin in February 2009, and a few weeks later also performed the male title role in Hänsel und Gretel, in a chamber opera adaptation for children of Humperdinck's work. During the 2009/10 season, he appeared in the Hungarian premiere of József Sári's opera Sonnenfinsternis (Darkness at Noon), in the role of Little Loewy. Since 2010, he has sung the roles of Jacquino in Fidelio, Wagner in Boito's Mefistofele and Monostatos in Die Zauberflöte. He portrayed Ferenc Liszt's valet in Excelsior!, an opera about the life of the Hungarian composer written by Gyula Fekete with specific soloists from the Opera House in mind. During the 2011/12 season, he made his debut at Staatsoper Hannover in the role of Scaramuccio in Ariadne auf Naxos, and also tested his mettle in a different genre at the Budapest Operetta Theatre when he portrayed Thuy in Miss Saigon. A member of the companies of both Staatsoper Hannover and the Hungarian State Opera between 2012 and 2014, he returned home to Hungary in 2014/15, where he has been participating in numerous productions at the National Theatre of Miskolc and the Opera House. He is currently a soloist with the Opera, where his roles include Otto in Bánk bán, and he is also returning as a permanent guest singer to Staatsoper Hannover, where audiences will get the chance to see him in the role of Vašek in Smetana's The Bartered Bride. In September of 2011, he won the Hungarian State Opera's Juventus Award.

The Master and Margarita – ONLINE premier