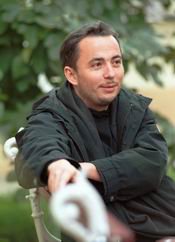 Balázs Kovalik was born in Budapest and completed his directing studies at Munich's Theaterakademie August Everding. He joined Budapest's Cellar Theatre in 1984, and later enrolled at the National Theatre's Academy of Drama in 1987. He started working at the Hungarian State Opera in 1991 as an assistant director. He headed the opera department of Budapest's Ferenc Liszt Academy of Music for more than 12 years, and served as the Hungarian State Opera's artistic director between 2007 and 2010. In 1995, he directed Puccini's Turandot at the National Theatre of Szeged in a production that elicited tremendous critical response and which was performed successfully for years. He has taught as a guest lecturer at universities in Berlin, Leipzig and Cairo. His productions have have been premiered, to great acclaim, in the opera houses of Budapest, Zagreb, Cairo, Hannover, Munich and Berlin. Since 2009 he has been teaching and directing at the Theaterakademie August Everding, where his projects have included Puccini's La bohème, and Hasse's operas Didone abbandonata and L'arbore di Diana. Since the 2012/13 season, Kovalik has been head of the institution's department of musical theatre and opera. He has received numerous awards and recognitions over the course of his career, including the Comet Award (1999), Artist of Merit (2000), the Kálmán Nádasdy Award (2002), the Gundel Artistic Award (2002), the László Vámos Award (2002), the Aegon Artistic Award as a nominee of János Térey (2008), the Moholy-Nagy Award (2014), and has also won the Theatre Critics' Award twice. At the Opera House, he has directed Turandot (1997), Le Grand Macabre (1998), Peter Grimes (1999), Bluebeard's Castle (2001), Blood Wedding (2003), The Turn of the Screw (2004), Elektra (2007), Eugene Onegin (2008), Fidelio (2008), Xerxes (2009), Sonnenfinsternis (2009) and Mefistofele (2010)