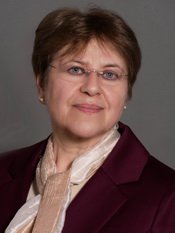 Éva Lax studied solo voice at the Béla Bartók Conservatory of Music while simultaneously earning her teaching degree in Russian and Italian at Eötvös Loránd University. Since 1972, she has taught nearly every branch of Italian language studies in the Italian department at ELTE while also remaining active as a singer. A founding member of Affetti Musicali, she has also appeared with numerous other early music ensembles both in Hungary and abroad. She edited the critical edition of the letters of Claudio Monteverdi (Casa Editrice Leo S. Olschki, Florence), which was also published in Hungarian in 1998. She has published numerous articles both in Hungary and Italy about both musical and linguistic subjects, and has also released numerous CDs on the Hungaroton and Dynamic labels. She has taught solo voice for more than 25 years, previously at the Leó Weiner Music School, and now at the Mária Ward Music School.