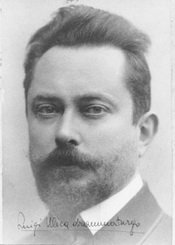 (1857-1919)
Luigi Illica wrote numerous important opera librettos around the turn of the twentieth century. He worked together with Puccini on the texts for Manon Lescaut, La bohème, Tosca and Madama Butterfly, and is also credited with the librettos for Catalani's La Wally and Giordano's Andrea Chénier. Born in Piacenza, Illica settled in Milan in 1879 to work as a journalist. His involvement with the theatre started in 1875, and his first opera libretto dates from 1889. In 1892, Illica and Giuseppe Giacosa were invited to complete the libretto for Manon Lescaut, and the two of them would then go on to collaborate on the librettos for Puccini's next three operas as well. Illica also worked independently on more than 30 other librettos, including ones for operas by Giordano and Mascagni.