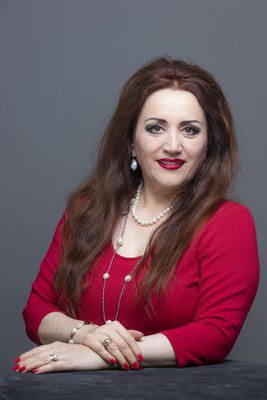 Gyöngyi Lukács pursued her musical studies at the Moscow Tchaikovsky Conservatory, studying piano, music composition and voice. She was 20 years old when she made her debut at the Hungarian State Opera as Leonora in Verdi's Il trovatore, and she later also received numerous leading roles that she would become the youngest artist in the Opera's history to sing, such as Violetta (La traviata), Nedda (Pagliacci), Silvana (Respighi's La Fiamma), Tosca and Amelia Grimaldi (Simon Boccanegra). In Budapest she primarily sang Verdian heroines, receiving tremendous acclaim in Otello under the baton of Lamberto Gardelli.
Her first international appearance was in Basel, where the audience greeted her Tosca with great enthusiasm. Her first debut in one of the world's leading opera houses took place in 1994 on the stage of the Deutsche Oper Berlin, where the critics welcomed “the youngest Tosca in the history of the Deutsche Oper”. She also successfully performed this role in both Los Angeles and San Francisco – with Plácido Domingo conducting in the latter city – and it was also in the role of Tosca that she made her debut at New York's Metropolitan Opera in the spring of 2002. Her debut at Milan's La Scala as Leonora in La forza del destino met with resounding success in a production conducted by Riccardo Muti, who later invited her to join him on further productions. In April of 2001, she would get to return to the citadel of Italian opera as Amelia in Un ballo in maschera. She took the stage in Palermo and at Barcelona's Gran Teatre del Liceu as Turandot. She first got to sing Lady Macbeth, Verdi's most challenging role, on the stage of London's Covent Garden. After this, she appeared in Macbeth at various venues around the world, including the Edinburgh Festival, Munich, Vienna, Tokyo, Seoul, Santiago de Chile, San Francisco and Los Angeles. At the Wiener Staatsoper in 2002, she partnered with both Plácido Domingo and José Cura in Andrea Chénier, and with Juan Pons and Samuel Ramey in Nabucco, and she has also sung Maddalena in both Tokyo and Seoul.
She is a permanent guest artist with a number of the world's major opera houses, with Hamburg, Cologne and Salzburg all playing important parts in her career. Her partners have included, in addition to the aforementioned international stars, Leo Nucci and Dolora Zajick.
Her principal roles include Norma, Tatyana (Eugene Onegin), Maddalena (Andrea Chénier), the title roles of Manon Lescaut, Tosca and Turandot, Abigaille (Nabucco), Lady Macbeth (Macbeth), Verdi's two Leonoras (Il trovatore and La forza del destino), Violetta (La traviata), Amelia (Un ballo in maschera) and Desdemona (Otello).