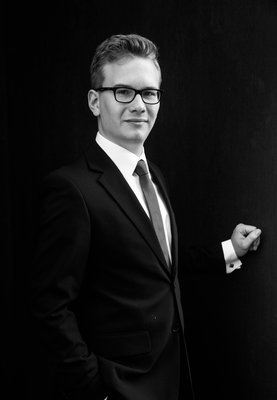 Paul Marsovszky was born in Munich, where he lived for 15 years. After his studies at the Béla Bartók Conservatory of Music in Budapest, he graduated from the conducting department at Franz Liszt Music Academy, Budapest (Professors: András Ligeti and Ádám Medveczky). He continued his studies at UdK Berlin and became Iván Fischer's assistant conductor with the Budapest Festival Orchestra in 2019. He took part in several international conducting competitions, such as the Maestro Solti Competition (Budapest, 2017), Deutscher Dirigentenpreis (2019 and 2021), Donatella Flick Competition (2021) and Malko Competition (2021).
In 2018, he participatet in Bernard Haitink's masterclass during the Lucerne Festival and was awarded the Bayreuth-Scholarship by the Budapest Wagner-Society.
He is closely connected to the opera repertoire: as a member of the children's choir of the Gärtnerplatztheater Munich, he sang in operas like Carmen, La Bohème and Hänsel und Gretel. He was one of the three boys in the Magic Flute for one season. At age 19, he assisted in an opera production at the Lübeck Theatre.
Following the reopening of the Opera Budapest he conducted „Mayerling“ for six performances in spring 2022.