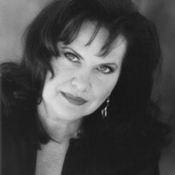 Éva Marton was born in Budapest in 1943 and graduated from the Franz Liszt Academy of Music there in 1968 after studying under Dr Jenő Sipos. She made her debut at the Opera House in that same year, as the Queen of Shemakha in Rimsky-Korsakov's opera Le Coq d'Or. Between 1968 and 1972, she started her career as the Opera's leading lyric dramatic soprano and later shifted to dramatic soprano roles, featuring in the world premiere of Sándor Szokolay's opera Hamlet. With a repertoire of more than 40 roles and nine solo albums to her name, she has regularly worked abroad – both on international opera stages and in the recording studio – with the world's most renowned conductors, including James Levine, Lorin Maazel, Claudio Abbado and György Solti. The core of her enormous repertoire consists of works by Mozart, Verdi, Wagner, Puccini and Richard Strauss. Among her several dozen audio and video recordings are numerous rarities, including works by Korngold, d'Albert, Respighi and Schönberg. She was a soloist with the Frankfurt Opera from 1972 to 1977, and with the Hamburg State Opera after 1977. Her international career was launched when she sang the role of Mathilde in William Tell in Florence opposite Nicolai Gedda. After that, debuts followed in swift succession in the great opera houses of the world: Vienna in 1973 with Tosca, as well as Tatiana in Onegin, New York in 1976 with Eva in Die Meistersinger von Nürnberg, Bayreuth in 1977-78 with Venus and Elisabeth in Tannhäuser, Milan in 1979 with Leonora in Il trovatore and Buenos Aires in 1979 with Elsa in Lohengrin, just to mention a few. Soon to become another of her key roles, along with Tosca, was Turandot, which she first sang in 1983 at the Wiener Staatsoper, where she also débuted another of her signature roles, Richard Strauss's Elektra, in 1989. She also enjoyed great acclaim in Hamburg, singing the roles of Otrud in Lohengrin and the Kostelnička in Janáček's Jenůfa, and in Berlin, as the Dyer's Wife in a complete version of Strauss's Die Frau ohne Schatten. Her other prominent roles include Brünnhilde in Wagner's Ring, the title role of Strauss's Salome, Judith in Bartók's Bluebeard's Castle and Leonora in Beethoven's opera Fidelio.
Between 2002 and 2007, she served as the artistic director of the Miskolc Opera. She is also a professor emerita at the Liszt Academy, after heading the institution's Department of Vocal and Opera Studies from 2005 until 2013. She was named a regular member of the Hungarian Academy of Arts in 2012 and appointed to its presidium in 2014.