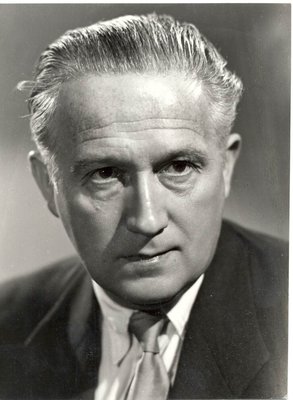 (1904-1980)
Kálmán Nádasdy's relationship with the genre of opera started when he was 18 years old, with his superb translation of the libretto to Gianni Schicchi. He worked as an intern director at the Opera House for three years, and then from 1926 to 1932 studied music composition under Zoltán Kodály. In 1933, he returned to the Opera House, where he worked as a director for years, becoming chief director in 1957 and general director from 1959 to 1966. A professor at the College of Theatre and Film from 1948, he served as general director there between 1964 and 1974. In addition to his career as a director, he could also claim some major successes with literary translations – he left just us much of a mark on Hungarian opera performance as his contemporary and, for decades, fellow director, Gusztáv Oláh. Nádasdy was a man of instantaneous intuition who would stage operas from various stylistic periods with brilliant ideals balanced with unified and profoundly thought-out concepts that delved into psychological depths. His truest domain was the world of Puccini, which even by world standards, few understood as well as he did. He would work out the acting to the tiniest detail, while at the same time leaving a great deal to the improvisational ability and empathy of the singers. He guided both the soloists and the crowds with unerring sure-handedness, In the final productions of his career, he was drawing closer to the most contemporary styles, to the “New Bayreuth” concepts. He educated a cohort of singers, and as a trained composer and a fine musician, he naturally always used the music itself as the starting point for all of his work. He revised the text for Hunyadi László and Bánk bán. He also worked on the spoken-word stage and as a film director, and guest directed in numerous centres of opera outside of Hungary, chiefly in Italy (at Milan's Teatro alla Scala, Florence's Maggio Musicale, Verona's Arena, as well as in Rome and Palermo).