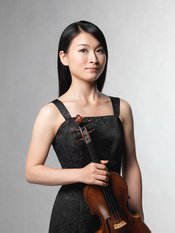 Haruka Nagao earned her bachelor's, master's and doctoral degrees at the Tokyo University of the Arts, and also studied at the Graz University of Music and Performing Arts and at Budapest's Ferenc Liszt Music Academy. Over the course of her artistic career, she has won awards at numerous competitions. In 2001, she became the youngest artist ever to win first prize at the Toshiya Eto Violin Competition, and she was also awarded second place at the Youth Classic Competition and first place at the All-Japan Students Music Competition in 2004. After proceeding to take second place at the Osaka International Music Competition in 2005 and to win both the Munetsugu Angel Violin Competition and the Japan Music Competition outright in 2007, she then went on to come in third at the Sendai International Music Competition in 2010 and at France's Dominique Peccatte International Competition in 2016. In that same year, she also won first prize at the Gianluca Campociaro International Music Competition in Italy. She earned her most recent victory in Hungary in 2018, at the Carl Flesch International Violin Competition, where she also won a special prize for her playing of Mozart. In addition to her triumphs at competitions, she has also regularly received various awards and recognitions for her work, including the Ataka Award, the Acanthus Award, the Matsukata Hall Music Award and the Midorinokaze Music Award.
As a concert musician, she has worked with many orchestras, including the Tokyo Symphony Orchestra and the Tokyo Philharmonic, the Sendai Philharmonic, the Sinfonietta Sizuoka ensemble, the New Japan Philharmonic, the Yamagata Symphony Orchestra, the Orchestre Philharmonique de Radio France, the Duna Symphony Orchestra and Szombathely's Savaria Symphony Orchestra.
She has appeared on Japanese television and radio programmes on multiple occasions, as a member of the Quelle Quartet string quartet from 2008, and since 2017, of the HaruQuartet. With the former, she was a collaborator with the “Haydn Total” project launched by the Tokyo and Vienna music academies, in which she recorded all 68 of Haydn's string quartets, which were then released on a series of CDs.
After serving as Sinfonietta Shizuoka's concertmaster between 2012 and 2015, she has held the same position with the Hungarian State Opera Orchestra since 2016.