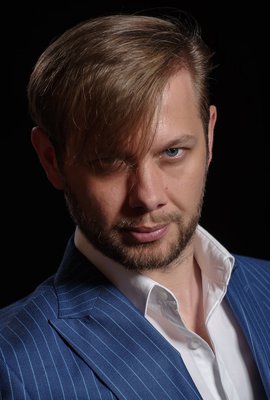 Baritone Zoltán Nagy took the opera stage for the first time as Basilio in Il barbiere di Siviglia in his native city of Kolozsvár (Cluj-Napoca). Between 2008 and 2010, he served as the youngest member in the history of the Wiener Staatsoper, where he received the opportunity to sing with the world's leading artists. A recurring guest in the theatres of such cities as Hamburg, Leipzig, Bilbao, Nice, Athens, Trieste and Palermo, Nagy has a repertoire that encompasses primarily Italian and French operas, as well as Mozartian and Wagnerian roles. The artist's first CD, Bohuslav Martinů's rarely performed Ariadne performed in Essen under the baton of Tomáš Netopil, was released by Naxos in 2015. Nagy made his Erkel Theatre debut in 2013, in the title role of Háry János, and he has since partnered with Andrea Rost as Silvia in Pagliacci there, in addition to singing the roles of Schaunard in La bohème 2.0 and Guglielmo in both Jiřì Menzel's and Miklós Szinetár's productions of Così fan tutte. The young artist is made his Bolshoi Theatre debut in Moscow as Count Almaviva in Le nozze di Figaro in June of 2018.