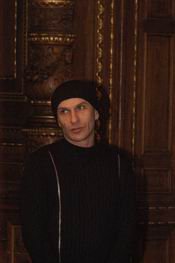 Ukrainian designer Oleksandr Bilozub graduated from the Kiev Academy of Applied Arts in 1979 and then obtained a degree in directing from the city's University of Culture and Arts in 1990. After directing several productions in which he also appeared as an actor between 1991 and 1995, he worked as a set designer at Kiev's Theatre on the Podol from 1996 until 2000 (notably, on Andriy Zholdak's productions of Carmen and The Idiot). Since 2002, he has been an actor, designer and director at the Ivan Franko National Academic Drama Theatre in Kiev while also working at the Illyés Gyula Hungarian National Theatre in Beregszász and doing design work as Attila Vidnyánszky's regular collaborator at the National Theatre, New Theatre and Hungarian Theatre in Budapest and at the Csokonai National Theatre in Debrecen.
At the Hungarian State Opera, his designs have appeared in Janáček's Jenůfa (2004), Shostakovich's Lady Macbeth of the Mtsensk District (2005), Wagner's Die Meistersinger von Nürnberg (2006), three one-acts – Renard, Mavra and L'Histoire du soldat – by Stravinsky (2007) and Verdi's La forza del destino (also in 2007).