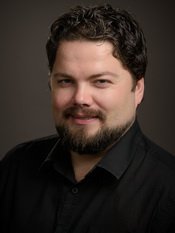 
Adorján Pataki was born in Dicsőszentmárton (Târnăveni) in 1981 and started his musical education at the Calvinist College of Kolozsvár (Cluj-Napoca), moving on to the Gheorghe Dima Music Academy in that same city in 1999 to study singing under Marius Vlad. He joined the Kolózsvár Hungarian Opera as a soloist in October of 2005, and since that year he has collaborated with the philharmonic orchestras of Arad, Nagyvárad (Oradea), Nagyszeben (Sibiu), Szatmár (Satu Mare), Brassó (Brașov), Craiova, Vâlcea, Iași and Botoșani, the Bucharest Chamber Orchestra, the Kolozsvár (Cluj-Napoca) Romanian National Opera, the Romanian National Opera of Temesvár (Timișoara) and the Hungarian State Opera. In 2007, he sang Alfredo (in La traviata) in Eszék (Osijek) on the centenary of the establishment of the city's theatre. In the 2012/13 season, he sang Pinkerton (Madama Butterfly) in both Darmstadt and Chemnitz, following up with appearances as Rodolfo (La bohème) in Bergen and as Gabriele Adorno (Simon Boccanegra) in Prague during the 2013/14 season. He has participated in tours of the Netherlands, Austria, Switzerland, Spain, Germany, Bosnia-Herzegovina and Norway. In 2006, he received the special prize from the Romanian Association of Composers and Musicologists (UCMR) at the Traian Grozãvescu International Singing Competition, and in 2009 took the special prize for best chamber music performer at the Ionel Perlea International Song Competition, while 2010 saw him win special awards both at the Ninth International Ferenc Lehár Operetta Singing Competition and from Duna Television. He has been a permanent guest artist at the Hungarian State Opera since 2011, with his roles there including Gabriele Adorno (Simon Boccanegra), Rodolfo (Luisa Miller), Tamino (Die Zauberflöte) and the title role of Hunyadi László.