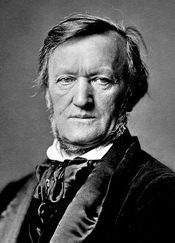 
(1813-1883)
Richard Wagner was one of the key defining figures in opera history. His musical dramas employed innovations that served as the foundation for the evolution of music history. To this day, his works present a challenge to the world's greatest opera houses. Born in Leipzig, Wagner found his first true success with the Dresden premiere of Rienzi in 1842, which was swiftly followed by Der fliegende Holländer and Tannhäuser. Starting in 1864, the eccentric Bavarian king Ludwig II enabled him to work in Munich, where he first presented his operas Das Rheingold (1869), Die Walküre (1870), Tristan und Isolde (1865) and Die Meistersinger von Nürnberg. Through years of work, he managed to amass enough money to make a reality out of his dream of creating a festival in Bayreuth for presenting his own works. It was there in 1876 where the entire Ring was performed for the first time, in an opera house built expressly for this purpose. Wagner's final opera, Parsifal, was premiere in Bayreuth in 1882, a few months before the composer's death.