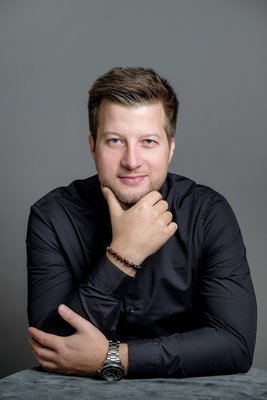 Born in the Transylvanian town of Csíkszentsimon (Sânsimion) in 1989, Csaba Sándor started his music education at the Nagy István High School of the Arts in Csíkszereda (Miercurea Ciuc) under the tutelage of Attila Adorján before enrolling at the University of Nagyvárad (Oradea) to study with Marian and Simona Boboia. He also trained with Éva Marton at Budapest’s Franz Liszt Academy of Music in the second half of 2010. He earned his master’s degree from the Gheorghe Dima Academy of Music in Kolozsvár (Cluj-Napoca) in 2014, where his advisor was Marius Vlad Budoiu.

He made his Hungarian State Opera début in 2015 as Masetto in Don Diovanni, singing alongside Erwin Schrott. Since then, he has appeared in many operatic roles here, ranging from the Count of Nevers in Les Huguenots and Papageno in Die Zauberflöte to Schaunard in both La bohème and La bohème 2.0 and Cillei Ulrik in Hunyadi László.

He has also taken part in the world premieres and other performances of several contemporary operas (including Gábor Péter Mezei’s Opposite the Catafalque, Zsófia Tallér’s Leander and Linseed, György Selmeczi’s Byzantium and Spiritisti, and László Lajtha’s The Blue Hat. He also regularly performs as a soloist in oratorios.

He joined the Kolozsvár Hungarian Opera as a soloist in 2013 and has portrayed several title roles here. He is also regularly invited to perform at the Romanian National Opera Iași, and his 2017 debut as Don Giovanni in a production directed by world-famous Romanian director Andrei Serban at the Romanian National Opera Bucharest met with tremendous acclaim. That same year also saw him win the Award of Excellence at the Gala of the Romanian National Operas. In 2019, at the celebrations in Tegu marking the 30th anniversary of the establishment of diplomatic relations between South Korea and Hungary, he sang the role of Petúr bán in the Hungarian State Opera’s performance of Ferenc Erkel’s opera Bánk bán there.

He has collaborated with the Romanian State Opera, the Hungarian National Choir, the Szeged Symphony Orchestra, the Nagyvárad (Oradea) State Philharmonic, the Szatmárnémet (Satu Mare) Philharmonic and the Csík Chamber Orchestra.

DIE FRAU OHNE SCHATTEN (THE WOMAN WITHOUT A SHADOW)