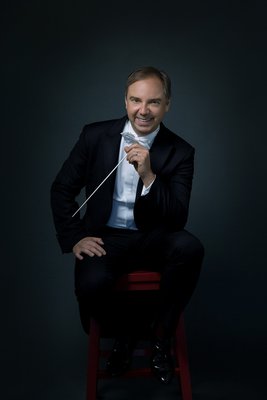 Sebastian Lang-Lessing began his international career as assistant to Gerd Albrecht at the Hamburg Staatsoper. In 1993, he was brought to the Deutsche Oper Berlin by his mentor Götz Friedrich as the youngest principal conductor at the time. At the age of just 24, he received the coveted "Ferenc Fricsay Prize". Today Lang-Lessing is an established and respected international artist and regularly conducts at the opera houses of Paris, Hamburg, San Francisco, Los Angeles, Washington, Oslo, Copenhagen, Stockholm Seattle, Vancouver, Sydney, Tokyo, Seoul and Cape Town. He was principal conductor of the Orchestre symphonique et lyrique de Nancy and the Nancy Opera, which under his leadership developed into the Opéra national de Lorraine, the most important opera house in northern France. He also led the Tasmanian Symphony Orchestra, with whom he released an extensive and multi-award-winning discography, and in ten years together made his mark on the San Antonio Symphony Orchestra, of which he was subsequently appointed MD Emeritus. Since 2020, Sebastian Lang-Lessing has been Music Director of the Korean National Opera, where he has led several successful productions since 2018, most recently a new production of "Fidelio" in collaboration with visual artist Kevork Mourad.

In the 2021/22 season, in addition to productions at the Korean National Opera, Sebastian Lang-Lessing will also be a guest conductor at the Copenhagen Tivoli, the Liechtenstein Symphony Orchestra, the Malmö Symphony Orchestra and the Brandenburg State Orchestra Frankfurt (Oder), among others. At the Hungarian National Opera he conducts performances of Johann Sebastian Bach's St Matthew Passion in the version by Felix Mendelssohn. In San Antonio, he serves as an honorary conductor on various projects, continuing his strong relationship with the orchestra and his commitment to the fine arts in Texas.

Highlights of recent seasons include performances of his Tristan/Elgar arrangement with cellist István Várdai and the Hungarian National Philharmonic in Budapest, the closing concerts of the Tivoli Festival in Copenhagen with Renée Fleming, and a return to Seoul with a new production of Samson and Delilah and La Traviata. He also opened the iconic Oslo Opera House and worked in Paris with Maurice Béjart on his spectacular interpretation of Ludwig van Beethoven's 9th Symphony, which he later toured in Japan. Lang-Lessing conducted China's first production of an opera by Richard Strauss, "Der Rosenkavalier" at the NCPA in Beijing and led numerous concerts and master classes.

In 2020, during the corona pandemic, he launched the website "VirtuMasterClass", an online platform for instrumental and vocal master classes where renowned soloists and interested students from all over the world can connect. Among the teachers Sebastian Lang-Lessing has been able to recruit for this project are the cellists Johannes Moser and Alban Gerhardt, violinist Vadim Gluzman and pianist Alessio Bax.

Sebastian Lang-Lessing is a true cosmopolitan. He speaks five languages fluently, loves to travel and holds music director titles on five continents. In education projects, he is committed to the future and low-threshold of classical music. His friendships with composers such as Detlev Glanert, Brett Dean and Stewart Copeland have led to a series of new commissions and premieres.

Artists such as Yo-Yo Ma, Emanuel Ax, Joshua Bell, Olga Kern, Susan Graham, Kirill Gerstein, Lynn Harrell, Lang Lang and Augustin Hadelich became regulars with the orchestra during Lang-Lessing's time with the San Antonio Symphony. He has a long artistic friendship with many of them. He also maintains a close musical relationship with the singer Renée Feming, with whom he released the album "Guilty Pleasures" (DECCA) in 2012 with the Philharmonia Orchestra London and a broad repertoire of arias and songs.