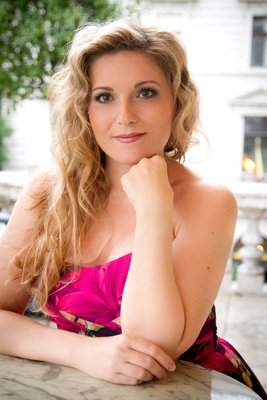 Krisztina Simon started her voice training at the Ferenc Liszt Music School in the town of Orosháza before studying at the Szeged Conservatory of the Ferenc Liszt Academy of Music. In 1995, she won admission to the voice programme at the Liszt Academy in Budapest, and later also applied to the opera course, where she studied under Júlia Pászthy, Ádám Medveczky and Géza Oberfrank. In 1999, she received the Artisjus Award for presenting contemporary Hungarian music, and made her debut at the Hungarian State Opera House as a music academy student in that same year. Upon graduating with a degree in opera singing, voice and art pedagogy in 2000, she went on to win the Annie Fischer Scholarship three years in a row. A soloist with the National Theatre of Szeged between 2003 and 2008, she also sang the role of Cherubino in the Mozart Marathon produced by the Budapest Spring Festival. She has made guest appearances at Eger's Géza Gárdonyi Theatre and at the national theatres of Pécs, Győr and Miskolc. Her roles thus far include Angelina and Tisbe (La Cenerentola), Rosina (Il barbiere di Siviglia), Cherubino (Le nozze di Figaro), Preziosilla (La forza del destino), Meg Page (Falstaff), Wellgunde (Das Rheingold), Rossweisse and Grimgerde (Die Walküre), the Second Lady (Die Zauberflöte), Zerlina (Don Giovanni), Suzuki (Madama Butterfly), Gianetta (L'elisir d'amore) and Bersi (Andrea Chénier). She regularly appears in productions at the Wagner in Budapest Opera Festival at Müpa Budapest and performs in concerts both in Hungary and abroad.