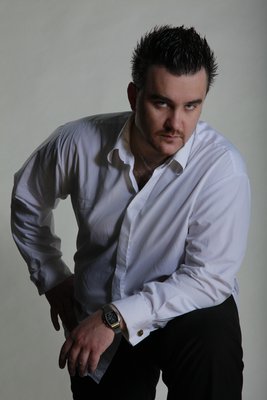 Csaba Szegedi was born in the town of Sajószentpéter in 1981. He then went on to graduate from Budapest's Béla Bartók High School of Music, after studying voice under Mária Fekete, and then earn a diploma in voice and voice pedagogy from the Ferenc Liszt Academy of Music, where his teacher was Sándor Sólyom-Nagy. He then continued his studies at the academy's opera department under the guidance of conductors Ádám Medveczky and Péter Oberfrank and director Balázs Kovalik. At his
2008 thesis performance, he sang the roles of Dr Miracle and Dappertutto in Les contes d'Hoffmann. In that same year, as a scholarship winner, he signed with the Hungarian State Opera, where in his first season he made his debut in two principal roles: Figaro in La barbiere di Siviglia (director: Balázs Kovalik after András Békés) and as Creonte in Haydn's L'anima del filosofo, a production by Sándor Zsótér conducted by Adam Fischer. The following season, he would also get the chance to portray Papageno in Die Zauberflöte – again under Fischer's baton, with László Marton directing. Since 2010, Csaba Szegedi has been one of the Opera's most-engaged lyric baritones, with a repertoire that includes roles such as Prince Yeletsky (The Queen of Spades), Biberach (Bánk bán – original version), Guglielmo (Così fan tutte), Marcello (La bohème), Paolo (Simon Boccanegra) and Malatesta (Don Pasquale). In the spring of 2013, he debuted in the title roles of Onegin and Don Giovanni, and later also received the title role in Kodály's Háry János. He then went on to portray Bagó in John the Valiant and Harlequin in Richard Strauss's Ariadne auf Naxos, Escamillo in Carmen, Belcore in L'elisir d'amore and Thoas in Róbert Alföldi's production of Iphigénia en Tauride.
He also took the Klagenfurt stage in the roles of Alfio and Tonio in Cavalleria rusticana and Pagliacci. His debut was greeted with great acclaim, and more engagements were swift to follow. He returned to Klagenfurt to sing the role of Count Almaviva in Le nozze di Figaro, and also sang the role of Fieramosca in Berlioz's Benvenuto Cellini in Bonn. He sang the Count of Toulouse in Verdi's Jérusalem, sang Rossini's Figaro in Dresden and made his Salzburg Easter Festival debut as Montano in Otello, with Christian Thielemann conducting. He has also taken the Budapest stage as Busoni's Doktor Faust, Sharpless in Madama Butterfly, Mercutio in Roméo et Juliette and Enrico Ashton in Lucia di Lammermoor. He made his debut as Iago in Otello in Klagenfurt in February 2017.
In recognition of his outstanding work, he was awarded the Hungarian Bronze Cross of Merit, civil division, in 2017. He was awarded the title of Chamber Singer of the Hungarian State Opera for the 2018/19 season and György Melis Award in 2019.