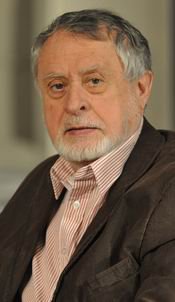 He was born in Budapest in 1932. He studied set design at the College of Applied Arts, Budapest, where he graduated in 1961. He started work at the Gárdonyi Géza Theatre, Eger. In 1965, he signed a contract with the Szeged National Theatre, where he spent six seasons. He became a designer of the National Theatre in 1979, then signed a contract with the Katona József Theatre. In 1990 he joined the National Theatre again. He has created designs for various theatres and open-air performances in Budapest and in the country as a guest designer. He started to teach at the scenic and costume design department of the College of Applied Arts in 1978. His first design in the Opera House was that of Il barbiere di Siviglia in 1986, which was followed by several memorable productions in cooperation with, among other, András Békés: Anna Boleyn (1987), Dido and Aeneas, Mario and the Magician (1988), Martha (1990) and Don Carlos (1994).