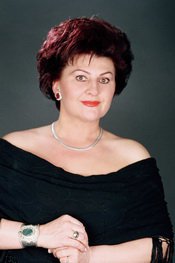 Besides her degree as a schoolteacher of music, she also obtained a degree as a piano teacher in her native city Szeged, where she - still as a student - won the special prize of the Maria Callas International Singing Competition in Athens. She received an opera singer degree with honours from Liszt Ferenc Academy of Music, and also studied lied and oratorio at Franz Liszt Musikhochschule, Weimar and the Mozarteum, Salzburg. She has sung a large number of main roles in various famous opera houses and concert halls around the world. Her main roles: Ortrud (Wagner: Lohengrin), Elisabeth (Wagner: Tannhäuser), Kostelnièka (Janáèek: Jenùfa), Gertrudis (Erkel: Bánk bán), Tosca (Puccini: Tosca), Sieglinde (Wagner: Die Walküre), Brünnhilde (Wagner: Siegfried, Götterdämmerung). Apart from her active opera singer career she is a professor and head of the Vocal Studies Department of the Faculty of Music of the University of Szeged.